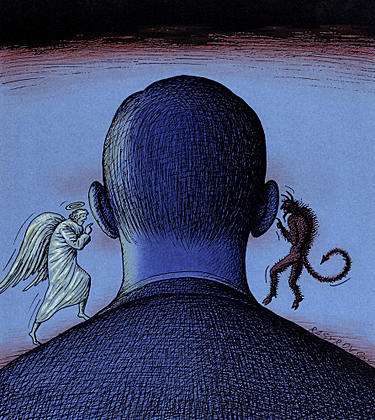 Although the cherished Catholic moral Tradition has continued to hold that the personal conscience is the ultimate and inviolable moral norm for acting in the here and now, my experience of teaching moral theology for the past 25 years or so, has made me realize that there are quite a number of good-hearted Catholics who do not hold this belief. For them, it is the clearly laid-down laws and norms that have to be the guide of our moral behaviour. Accordingly, the role of the personal conscience is to simply make those objective moral norms its own and obey them! Surprisingly among those who hold such simplistic views are a good number of Bishops, priests and seminarians, most of whom have had their theological formation during the last three decades or so. Their apparently well-founded preoccupation is that if personal conscience is considered as the ultimate and inviolable moral norm for a person’s acting, then, inevitably there would ensue what they call “moral relativism”. Such attitudes may well be the result of the post-Vatican-II preoccupation with regard to the rising trends of individualism and moral relativism, due to which even the official Church had been somewhat obsessed in making an exclusive insistence on objective moral norms often at the expense of the indispensable role which the Catholic Tradition had consistently attributed to personal conscience.

Combing through the New Testament, one sees how St. Paul laid the foundation for the Catholic moral concept of conscience (Rom. 2:14-15). Great theological pillars such as Sts. Augustine, Thomas Aquinas and Alphonsus Liguori followed suit and upheld the inviolability of a person’s conscience. Aquinas for example held that anyone upon whom the ecclesiastical authorities, in ignorance of the true facts, imposes a demand that offends against his/her clear conscience should perish in excommunication rather than violate his/her conscience. He went further to teach that if someone acted in his/her conscience but in invincible error, even such a conscience was excused of that error. Later, the official Patron of Catholic moral theology, Alphonsus Liguouri would write that such a conscience would not only be excused but would gain merit for acting so. Perhaps, the oft-quoted statement of John Henry Newman sums up the traditional Catholic position: “If I were asked to raise a toast to the Pope, sure, I will do so, but first to my conscience and then to the Pope”!

Based on such a solid traditional Catholic moral foundation, the Second Vatican Council officially taught that a properly formed conscience is the supreme norm of moral behaviour, especially in Gaudium et spes, No:16 wherein personal conscience is defined as the sanctuary or the “shrine” where God dwells, and therein, it is God’s voice that the person hears as to what ought to be done or what ought to be avoided. For this reason, the Catechism of the Catholic Church could teach: “Conscience is the aboriginal Vicar of Christ” (No:1778). The Decree on Religious Freedom re-confirmed this teaching when it taught: “In all his activity a man is bound to follow his conscience faithfully, in order that he may come to God for whom he was created. It follows that he is not to be forced to act contrary to his conscience. Nor, on the other hand, is he to be restricted from acting in accordance with his conscience, especially in matters religious” (No:3).

However, as already mentioned above, in the contemporary world, there are many who do whatever they wish and at the end simply say: “Well, I acted according to my conscience!”. Such attitudes would undoubtedly and inevitably lead to moral relativism. But, whenever the Catholic Tradition spoke of the supreme value of acting according to one’s conscience it always had in mind the properly formed conscience. As the etymology of the Latin term ‘conscientia’ itself implies in its literal meaning, it is a matter of “knowing with” or “knowing together” as to what is good and what is evil. Never could a conscience be on its own, in isolation, and then, be the moral norm for acting. Rather, as Vatican-II taught consistently it is only a properly formed conscience (with the available moral sources) that would be qualified to be the supreme norm of moral acting. However, for the believers, in the formation of their consciences, among other moral sources, the official Church teachings are indispensable. That is why Dignitatis Humanae, No:14 said: “In the formation of their consciences, the Christian faithful ought carefully to attend to the sacred and certain doctrine of the Church”. A little known fact is that the original draft presented to the Council Fathers had the phrase “the faithful ought to act according to…” which was replaced by the phrase we have highlighted with bold red letters above. The implication is that having paid careful, prayerful and serious attention to what the Church teaches, the believer ought to act at the end according to his/her own conscience. In other words, the believer takes personal moral responsibility for what he/she does or does not do. Or else, it is not a moral decision! After all, at the last judgment, it is he/she who has got to take personal responsibility for whatever he/she did or did not do, freely and willingly. That is why the Vatican-II could say that according to his/her acting or not acting on the dictates of his/her conscience, a person would be judged. (GS 16).

Unfortunately, quite a number of good-hearted Catholics are ignorant of (or do not wish to take seriously) these official teachings and as a result, are reluctant to assign a properly formed conscience its due place as taught by the Church, because most of them suffer with an undue phobia of moral relativism. A glaring contemporary example in this regard is their negative and pessimistic attitude towards Chapter Eight of Amoris Laetitia of Pope Francis.