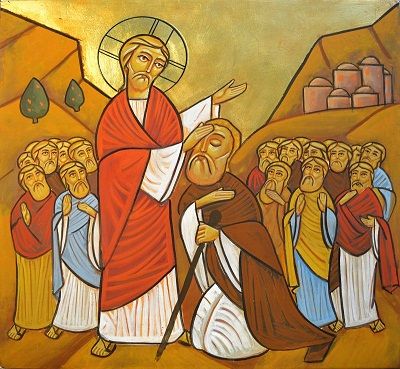 The Gospel reading of the Man born blind is easily my favorite Scriptural text (John 9. 1-41).

Notice how it starts without the man asking for anything.  Instead, while his disciples are wondering why the man is born blind, Jesus puts mud on the poor man’s eyes, and tells him to wash. The man returns cured.

But that’s just the beginning of the story.

In the meantime, Jesus exits.

The leaders want to know how did this man get cured.  Here’s where things get dicey for the man. By the end of the story, his frightened parents distance themselves from him and the temple leaders expel him.  He’s off on his own.

Throughout the text, he’s incredibly impressive, testifying on his own, on each occasion, with greater confidence about who Jesus is and what Jesus has done for him.  By the end he has grown in such courage, wisdom, and faith that he turns the tables and begins to question those questioning him.  It’s a tour-de-force for the man born blind. But he gets thrown out of the Temple.

Finally Jesus returns, having learned that the man born blind has been expelled.  He finds the man and reveals to him that he is the Son of Man.  The man who has been testifying to what Jesus has done for him, now completes his testimony and worships Jesus.

Why do I love this?  I think it’s about one’s prayer life.

First, Jesus’ arrives without any fanfare but simply touches the man.  He hears Jesus and acts as instructed.  I think its key to understand that Jesus approaches us first.

I think it’s key that Jesus touches.  I think that these unmistakable facts of the encounter are what gives one, like the man born blind, the assurance of faith.

Second, Jesus does not hang around.

In fact, when things get tough, Jesus has a tendency to not be there, precisely when the crisis starts. (sound familiar?)

Third, Jesus seems to trust that the man will figure out what he needs to say (is this from the healing, from the man’s nature, from the Holy Spirit?  Sure, whatever.).  The point is Jesus heals him, leaves him on his own to fend for himself

Fourth, Jesus doesn’t seem worried.  It’s not just the man born blind that he leaves to defend himself, think of Martha and Mary waiting for Jesus when their brother Lazarus is dying. Jesus deliberately stays back.

Fifth, Jesus comes back as nonchalantly as he arrived.  When it’s all over, he checks up on the man to help him understand even more what he has learned.

It’s a very honest text about the absence of Jesus in trying times.  It’s like Jesus likes to leave us on our own, that he trusts us.  But that eventually he checks in.

So now we are in the midst of a global pandemic.  Where is Jesus?  You can’t find him?  Not a surprise.  This time even the churches are closed.  Does that mean something? I don’t think so.

Jesus is around.  I know that by every fiber in my body.  He’ll show up again.  But in the meantime, he expects us to do the right thing until he comes back.